Rob Ford trying to throw a football and falling down instead.

According to spectators he may have been drunk at the time.
No comments:

Plus for fun, here is Rob Ford's 911 call when he was confronted by Marg Delahunty outside his home. 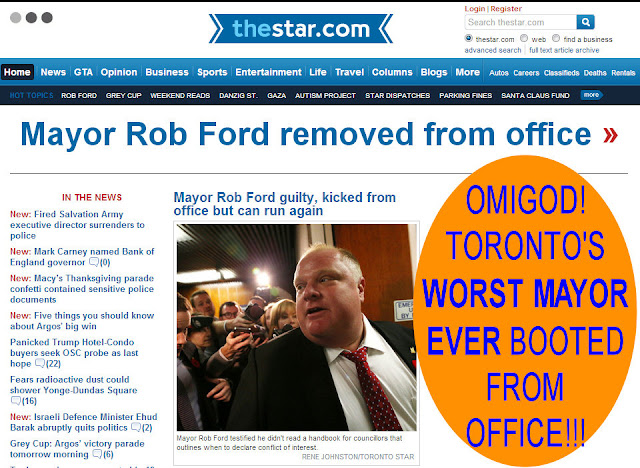 JUSTICE AND DEMOCRACY HAS SPOKEN TODAY.

In a bombshell ruling, a judge has found Mayor Rob Ford guilty of breaching provincial of conflict of interest law and ordered him removed from office, but put that ruling on hold for 14 days. It is a great day for democracy and the rule of law in Toronto.

That apparently means Ford remains in office while his lawyer launches an appeal and asks Divisional Court to put an indefinite stay on the removal order pending the outcome of that appeal. But the appeal will likely be turned down as Rob Ford is "cut and dried guilty" of misusing his public office for personal advantages - something he has done more than once.

It also gives Toronto City Council a little time to figure out how to deal with the prospect – unprecedented, in modern times – of a mayor being removed from office by the courts.

If Ford’s lawyers cannot convince Divisional Court to stay the removal order within 14 days, council will have the option of either appointing a councillor to be caretaker mayor until the end of the term in December 2014 or triggering a mayoral byelection.

Ontario Court Justice Charles Hackland’s decision appears to disqualify Ford from running in a byelection before the end of the current term, but does not say he can’t run in future civic elections in the province of Ontario.

In finding the mayor to have violated the Municipal Conflict of Interest Act, Hackland had the option of banning Ford from running for up to seven years. But that option was not exercised.

The hotly awaited decision followed a two-day hearing in early September that saw Ford grilled over his conduct at a Feb. 7 council meeting and the events that led up to it.

The city’s integrity commissioner ruled in 2010 that then-councillor Ford was wrong to use official letterhead and other city resources to solicit donations from people lobbying him for his namesake football foundation.

Council agreed and ordered Ford to repay $3,150 to lobbyists, their clients and one private firm. Ford ignored six reminders from the integrity commissioner before she brought the issue back to council Feb. 7.

There, Ford made an impassioned speech about why he shouldn’t be forced to repay the money, arguing it was spent distributing football equipment to schools. He voted to cancel the order that he repay.

In March, Toronto resident Paul Magder alleged Ford broke a provision in the Municipal Conflict of Interest Act which states elected officials can’t speak to, or vote upon, items in which they have a “pecuniary interest.” Which means Ford should not have voted in that particular vote and should not have even been allowed to speak during the debate.

At the hearing before Hackland, Magder’s lawyer Clayton Ruby argued Ford was “reckless” and “wilfully ignorant” of the law when he did not recuse himself from the debate and vote.

Ford, who was on council for a decade before becoming mayor in late 2010, claims that he never read the Conflict of Interest Act or the councillor orientation handbook. Nor did he attend councillor training sessions that covered conflicts of interest.

The mayor promised in his oath of office to “disclose conflicts of interest” but, when asked by Ruby if he understood the words, Ford said: “No. My interpretation of a conflict of interest, again, is it takes two parties and the city must benefit or a member of council must benefit.”

“As mayor he ought to have had a clear understanding of his obligations. This entire pattern of conduct shows that he chose to remain ignorant, and substituted his own view for that of the law,” Ruby said.

Ford, longtime coach of Etobicoke’s Don Bosco Eagles, vehemently disagreed, saying he acted only in the best interests of his high school students and for the benefit of his football team. (Which by itself, favouritism, is a conflict of interest.)

He pointed out that city council had no legislative authority to make Ford repay $3,150 in football charity donations in the first place. That means Ford was guilty of misusing his office in the first place. (Which is not the wisest move for a defense lawyer to make, because it implicates Rob Ford in more wrongdoing.)

Second, that if council did impose a penalty it was under Toronto’s code of conduct, not the Municipal Conflict of Interest Act, so Ford could not have breached the act. If the Act applied, elected officials could not defend themselves when criticized by the integrity commissioner, he added. However Provincial and Municipal Acts still effect actions taken within city councils, so this point was in error.

Finally, that if Ford did err by not declaring a conflict, it was an inadvertent “error in judgment.” Implying that Rob Ford did so out of stupidity and rather than out of greedy manipulation.

Justice Charles Hackland saw these three things as a very flimsy defence (like any sane person would) and found Rob Ford guilty of conflict of interest, thus forcing him to vacate his role as Mayor of Toronto.