Back in March of 2008, he repeatedly referred to the tireless work ethic of "Orientals":


Ford later refused to apologize for his racially biased comments.

Seriously, what kind of moron first makes comments like that - and then sticks to it, refusing to apologize?


That same month in 2008, Ford was charged with assaulting his wife during a temper tantrum and making threats against her, but the charges were later dropped.
No comments:

Rob Ford kicked out of Bier Markt for being too drunk

Yesterday, St. Patrick's Day, Rob Ford was escorted out of the bar Bier Markt after "storming the dance floor" and exhibiting generally drunken and "incoherrent" behavior.

Seriously, how drunk do you have to be on St. Patrick's Day to get kicked out of a bar??? 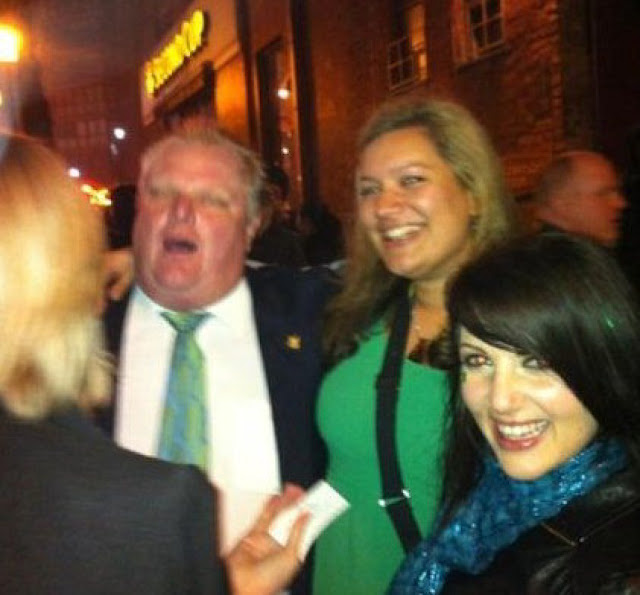 Former mayoral candidate Sarah Thomson says she wants an apology from Mayor Rob Ford for touching her inappropriately and making a suggestive remark to her at a party on Thursday night.

“He told me he was in Florida and I should have been with him because his wife wasn’t there,” Thomson told the Star on Friday. “I didn’t expect that. Rob doesn’t normally act that way towards women, so I was a little bit shocked and then we posed to get our picture taken and he grabbed my ass during the pose.”

Thomson first expressed the allegations in a post on her Facebook page after the party, which was held by the Canadian Jewish Political Affairs Committee at the Arcadian Court on Bay St.

“I kind of went, ‘This is unbelievable.’ I was shocked and walked away and told few people and they kind of went up to his handlers and said, ‘lets get him out of here, there’s something off with him,’” Thomson said.

He was probably high on cocaine again.

“At first I thought, oh, he’s just treating me like one of the guys, you know, you should have come down and have some beers. The wife comment kind of threw me. And then when he grabbed my ass I realized, hold it, no no, he’s going the other way with this. So, to me it was wrong and you got to say something,” Thomson said.

Thomson said she told a number of guests at the event in an attempt to get the mayor removed since he was acting strange, possibly drunk or high on cocaine (which he is known to use). She left the party at 11 p.m. and later posted the incident to her Facebook page.

“When I got home and I was still mad,” Thomson said. “I told my husband and he was just furious. So I went home and posted it on Facebook just to get it out there because I realize no, I’m not going to sue him, I’m not that type of person. . . but I think that this being International Women’s Day, I have to stand up and say something.”

Thomson made the Facebook post after midnight. She wrote: “Thought it was a friendly hello to Toronto Mayor Rob Ford at the CJPAC Action Party tonight until he suggested I should have been in Florida with him last week because his wife wasn't there,” Thomson posted on her Facebook page. “Seriously wanted to punch him in the face. Happy International Women's Day!”

In a comment on a photo of herself with Ford, she said, “Guess where his hand was in this picture? I must go shower.”

She later added: “Is grabbing someone['s] ass assault?”
No comments: 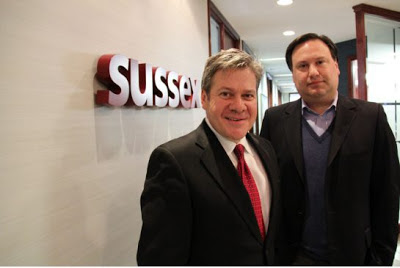 Since Mayor Rob Ford took office and declared the city “open for business” lobbying activity at city hall has exploded.

Three times more lobbyists signed up with the city in 2012 as in 2010. The number of subjects they’re pushing has doubled. Allegations of misconduct have tripled. And the daily communications logged between lobbyists and public office holders appears to be 10 times higher last year than the year before Ford took office.

And with the numbers on the rise, lobbyist registrar Linda Gehrke worries there is dwindling awareness around the “ethical” guidelines set out in the code of conduct.

But for many councilors, the most worrisome result of the new reality is that average citizens and community associations — people without the means to hire Bay Street professionals to plead their case — are being shut out.

“Unless you can hire a lobbyist, you can’t get a vote through the mayor’s office,” said left-wing councilor Adam Vaughan, a staunch opponent of the mayor’s.

It used to just be “the big money items. Now it’s every item. Two lobbyists were just working the floor of council on whether to widen a sidewalk,” he said referring to the recent debate over valet parking at Pusateri’s.

This year, even the Toronto Professional Fire Fighters’ Association felt they couldn’t go it alone during budget negotiations.

For the second year in a row, Toronto Fire was being targeted for cuts. The service stood to permanently lose 101 currently vacant jobs, five trucks and a station, at a time when the union was begging for more resources to deal with a booming population.

President Ed Kennedy tried to plead his case to the decision makers, but he couldn’t get meetings with a sizable chunk of councilors, particularly on the right and those recently elected.

“And we didn’t seem to have the ear of the mayor’s office like we wish we would have. Like we had before,” said Kennedy.

Kennedy then called Sussex Strategy Group, the most prominent, powerful and sought-after lobbyist firm working city hall. The mayor backed down on the cuts.

Rob Ford’s opponents, such as Vaughan, like to accuse the mayor’s office of having closer ties with lobbyists than any of his predecessors.

Toronto only began tracking lobbyist activity in February 2008, but the data does suggest the mayor has a more open attitude towards the practice than the previous mayor, David Miller. Miller was strongly opposed to bribes and pandering, but Rob Ford openly embraces backscratching and backroom deals.

According to records obtained through the city’s Open Data website, the mayor’s deputy chief of staff Earl Provost and Ford rank fourth and fifth on the list of most-lobbied public office holders in Toronto. In 2010, no one on Mayor David Miller staff appeared in the top 20.

“Mayor Ford believes in customer service excellence and no other mayor has ever been as open and available to everyday taxpayers, residents and business leaders. This data simply confirms this,” Ford’s spokesperson said in a statement.

The statistics around actual lobbying are even more staggering

One note of caution: the following figures can only be used to assess a general trend, because 29% of the time, the year of the meeting was not recorded. Even taking this into account, the increase in communications — such as a meeting, email or telephone call — appears to have skyrocketed since the Ford took office. In 2010, the database showed lobbyists recording 587 communications. By 2012, that number hit 5545.

Allegations of misconduct are also on the rise.

In 2010, the registrar launched 10 investigations. In 2011, that number spiked to 46. In 2012, Registrar Linda Gehrke looked into 30 cases. The majority of instances relate to unregistered lobbying, lobbying around procurements and to a lesser extent, ethical issues.

“And I think we are getting to the point where people know generally about registration, but there may not be as much awareness of the requirements of the code of conduct,” she said.

Gehrke has launched an investigation into the events of Oct. 16, when Councillor Ana Bailao was charged with impaired driving. Before her arrest Bailao was drinking at a posh downtown lounge with a small group, which included Sussex lobbyist Jamie Besner, Ford’s former chief of staff Nick Kouvalis — who does market research for Sussex — and Councillor Mark Grimes.

The optics weren’t good. Sussex is working for MGM casinos. Bailao is considered an important swing vote. And Grimes chairs the board for Exhibition Place, the preferred casino site.

Gehrke is not permitted to speak about her investigations or even confirm if they are occurring. Both Bailao and Besner say no city business was discussed, but some councilors say it’s the type of socializing that got the city in trouble more than a decade ago.

Shortly after amalgamation, the city signed a $43-million contract with MFP Financial Services for computer equipment. An inquiry was called after the contract nearly doubled without authorization from council.

Evidence emerged that city officials had been lavishly wined and dined by an MFP salesman; Madam Justice Denise Bellamy’s final report suggested that “inappropriately close relationships” between public officers and lobbyists were partly to blame. Establishing a lobbyist registry was a key recommendation of her report.

For Councillor Janet Davis, who on Thursday returned to her desk to find a gift bag from The Capital Hill Group on her desk, the status quo is not an option.

The bag contained a large sugar cookie with icing, and a card celebrating her “contribution to politics” on International Women’s Day. “It is completely unacceptable,” she said. “I know it’s not worth very much. It’s a cookie. But it’s still an attempt to influence councilors.”

Davis has lodged a complaint with Gehrke’s office.
No comments: