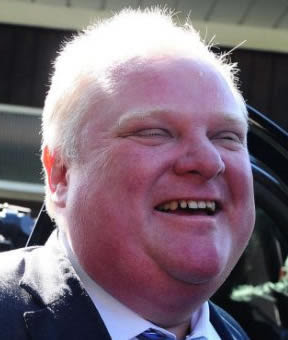 Earlier this month, Ford was asked to leave a gala for members of the military after he was witnessed "speaking in a rambling, incoherent manner that alarmed some of the guests."

According to guests he was "red faced and drunk".

The Toronto Star reported that it's "an open secret at city hall that the mayor has battled alcohol abuse."

Don't forget his past DUI and history of drug addiction. Or that time his crack dealer got arrested.

The request to leave the Toronto Garrison Ball came two weeks before Sarah Thomson, a Toronto businesswoman and former mayoral candidate, created a media storm when she accused Ford of groping her butt and appearing to be either intoxicated or high on drugs.
No comments: