How to prevent Doug Ford from winning a Majority Government

Doug Ford, the "Donald Trump" of candidates in Ontario, is running to become Premier of Ontario. Having left politics in Toronto behind, this former kidnapping extortionist drug dealer who enabled his brother Doug Ford to become a crack cocaine addict claims to be a "man of the people". He owns multiple homes in Ontario and the USA, a business worth 10s of millions he inherited from his father, and receives all sorts of bribes from his corporate buddies.

Sure, he is a great idea for Premier of Ontario.

Doug Ford once privatized and replaced a garbage collection company to get rid of all the union staff members. Can you imagine what he will do with Ontario Hydro? Privatize it of course. He wants to fire everyone, and sell the asset off - which will lead to the people of Ontario having to deal with unregulated electricity prices that will no doubt skyrocket.

So how do we prevent this?

Well first you need to understand that Ontario has only 3 major political parties.

And the Uber-leftist "New Democratic Party" aka NDP.

So what happens regularly is that the two main parties, the PCs and Liberals trade places forming a government and managing the province of Ontario. The NDP has only once ever formed a government, but they often have a deciding influence on who wins.

In many elections in Ontario the "winner" often wins by a small percentage of the total vote, thus how well or poorly the NDP does often decides which of the other two parties becomes the victor.

So here are some examples going back the last 33 years as to why this would make a difference.

Analysis - Ontario voters were unhappy with the PC minority government and voted in a strong Liberal majority 2 years later. The Conservatives had lost som much of their popularity they were nearly tied with the NDP, while the NDP had grown in popularity. Cooperation between the Liberals and NDP would not have been a necessity that year.

Analysis - That brief love affair between Ontario and NDP propping up the PCs in 1985 came back to haunt us and they went all in, handing Bob Rae's NDP a strong majority which lasted for 5 years. The PCs were still hugely unpopular and the Liberals, only 5.2% behind the NDP, also suffered under the Orange Fever that swept Ontario that year. The NDP had never formed a government in Ontario before, and it later led to disaster, "Rae Days" from striking teachers, and a general hatred of the NDP.

Analysis - Okay so this is a year where cooperation definitely would have benefited the NDP and Liberals. The Conservatives won a strong majority with the Liberals lagging in popularity, and the NDP doing surprisingly well under leader Bob Rae despite his huge loss in popularity. Would the PCs still have won if they had cooperated? Yes. But they might have only won a minority if the NDP/Liberals played their cards right.

Analysis - The NDP did poorly that year. Bob Rae had since resigned, and the NDP tried running a leader who looks and acts somewhat insane. However there was only a 5.2% vote difference between the PCs and the Liberals, enough that strategic voting on behalf of Liberals and NDP voters could have made a difference and given both the Liberals and NDP more seats - and possibly enough to close the gap, causing either a PC minority government or a Liberal minority government. During the 1995 to 2003 time period the Conservative Party privatized the resale of electricity, causing electricity rates in Ontario to skyrocket over the next 2 decades. They also caused massive teacher strikes which made "Rae Days" look like minor holidays.

Analysis - The Liberals won a huge majority. Mostly because the NDP candidate looked insane, but also because the Conservatives had just been in power for many years, they had become very unpopular and it was time for a change. The Liberals won by 11.8% and triple the seats of the PCs. Cooperation that year would not have been necessary to keep the Conservatives out of power, but doing so could still have benefited both parties.

Analysis - The Liberals won by 10.63% of the votes and almost got triple the seats of the PCs. Cooperation that year would not have been necessary to keep the Conservatives out of power, but doing so could still have benefited both parties.

Analysis - Now you might think, okay, that looks pretty good, but there was only a margin of 16 seats and 2.2% of the votes between the Liberals and the Conservatives. Cooperation that year would have been beneficial to safeguard keeping the Conservatives out of power, and doing so could still have benefited both parties. Since the Liberals only got a minority government the NDP ended up propping up the Liberals, a love affair that ended 3 years later.

Analysis - The Liberals won a nice majority with 30 seats to spare, but the vote percentages were much closer - only 7.4% apart - and could have led to a very different result had it been a tighter race. Clearly cooperation would not been a necessity, but it still could have been beneficial to both parties.


So what is the strategy?

If this strategy managed to work for just half of the ridings in past elections, that would have caused the following changes in election results:

In 1985 the Liberals would have formed a minority government instead of the Conservatives doing so, with the NDP propping up the Liberals.

In 1987 the Liberals would still win a majority, but the NDP would have been the official opposition instead of the PCs.

In 1990 the NDP would still win a majority, the Liberals would still be the official opposition, but the PCs would only have 10 seats total.

In 2003 the Liberals would still win a majority, but the NDP would almost double their number of seats since they did so poorly that year.

In 2007 the Liberals would still win a majority, but the NDP would increase their number of seats by 50%.

In 2011 the Liberals would win a majority instead of a minority, and the NDP would see their number of seats go up by 29%.

In 2014 the Liberals would still win a majority, but the NDP would surpass the Conservative seat total and become the official opposition.


All that is required here for these results is for the NDP and Liberals to cooperate on 20 PC stronghold ridings where Conservatives were most likely to win anyway, and for each party to win half of the ridings where their strategy was in place.

The results out of 9 elections?


9 times when the PCs would have been weaker as a political party.

The PCs would be weaker every single election, even if they still manage to win a few.
The number of times the PCs manage to form a government actually drops 66.6% from 3 out of 9 times to only 1 time out of 9.


And that last aspect, a 66.6% drop in Conservative governments... wow! That is huge.

That is a win for both the Liberals and NDP, and it is a huge win for the people of Ontario resulting in a stronger economy and more benefits for the common people of Ontario (and less tax cuts for the rich and corporations who frankly are not paying their fair share).

So what do the polls currently suggest? 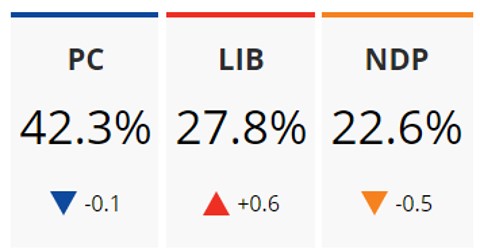 Keep in mind that anything over 38% typically means a party will win a majority, so at present it looks like Doug Ford will be the next Premier of Ontario.

So strategic cooperation (or strategic voting in specific ridings) would actually be very beneficial to the Liberals and NDP in order to keep the PCs out of power and most likely form a Liberal minority propped up the NDP - which ultimately gives the NDP the power to say yes or no to every bill the Liberals propose. It forces the two parties to cooperate.

Such cooperation would be hugely beneficial to both parties.

The Liberals win more elections. The NDP end up playing kingmaker and casting the deciding vote on new bills, forcing the hands of the Liberals. It would be hugely beneficial for both.

But if voters don't want to cooperate with each other, or the parties refuse to cooperate, I guess we are doomed to have Doug Ford as premier and a Conservative majority government.

The video below was finally released in August 2016.

The video shows then Toronto Mayor Rob Ford smoking crack and complaining about minorities and Justin Trudeau. While this is not the first time Rob Ford make disparaging and often racist remarks about minorities and Liberal politicians, this is the infamous "Rob Ford Crack Video" that made such a big fuss.

And really you kind of have to ask, why the big fuss? Why did Rob Ford try to deny the existence of the video and keep his crack addiction secret? It was clearly going to come out eventually. It was really just a matter of time.

If the video had come out, if Rob Ford had just admitted he was addicted to crack cocaine, if he had just entered rehab and later returned to work he would have been able to transition more smoothly and with less stress to being disgraced or possibly semi-disgraced politician.

But instead he fought it. He denied the existence of the video. It turned into a huge media fuss that became international news.

This isn't even the only video of Rob Ford smoking crack. There is actually a 2nd video.

So with multiple crack videos out there (and possibly more we are unaware of) it was really just a matter of time before they reached the media.

He died March 22nd 2016. The above video was released months after he was already dead.

Doug Ford, his older brother, is now running for Premier of Ontario, and judging by the polls Doug Ford is going to win a majority government because the Liberals and NDP are refusing to work together in key ridings.

It would be very simple for the NDP and Liberals to cooperate by not running candidates in ridings where the Conservatives are more likely to win due to vote splitting, and they could do this in a manner which prevents the Conservatives from forming a majority government.

Stay tuned for a future post where I will explain how Strategic Voting works and how the Liberals and NDP could cooperate to prevent the Conservatives from winning majority governments by running joint NDP-Liberal candidates in Conservative strongholds.