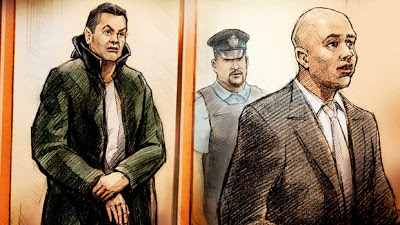 Scott MacIntyre is the ex-boyfriend of Ford’s sister Kathy, but is also Rob Ford's crack dealer. Police have yet to confirm the drug connection between the man arrested and Rob Ford, because Rob Ford is claiming he barely knows the man.

The cruisers arrived on the scene around 8:30 AM, after officers were called to nearby Clay Court for a suspicious vehicle, but they soon after visited the mayor’s house on Edenbridge Drive.

Investigators from 22 Division said little about what took place, labeling it a “death threat investigation”, wherein Scott MacIntyre is alleged to have uttered death threats against Rob Ford and forcing his way into his home.

Speaking briefly to reporters, brother and city councilor Doug Ford simply called it a security breach, not commenting at all on his brother's history of drug and alcohol abuse.

“I’m more concerned about his safety than he is. It goes with the job, no matter if it’s the Mayor of Toronto, the Mayor of New York, or the Mayor of Calgary,” says Doug Ford.

“I told Rob the other day there’s a lot of crazies out there. In my opinion, the mayor of the future, of the present, or of the past – they should have a security detail.”


Except this wasn't a normal crazy person who showed up. This is someone Rob Ford knows personally, a man who dated his sister, and was selling Rob Ford drugs (possibly on a regular basis, as addicts keep coming back for more).

Doug also said a security detail is available for the mayor if he wants, but Rob has always refused one because he likes his privacy. (More likely he wants his privacy so he can do illegal things without people watching him.)

The Mayor is downplaying the incident, despite this being the third death threat he has received since his term as mayor began.

“My kids are alright, everyone’s alright. You have to take care of your family first so that’s pretty well what I said and he took off and that was it.” he told 680News.

“I don’t want to get into too many details. It’s over and done with.”

Police presence has eased in the neighbourhood, with only two or three vehicles parked on neighbouring streets.


Scott MacIntyre, the man accused of threatening the life of Toronto Mayor Rob Ford, made a brief court appearance on Thursday.

MacIntyre, 45, was arrested on Wednesday, about six hours after someone allegedly forcing (or trying to force) his way into Ford's west Toronto home.

In court MacIntyre was subdued as he listened to the charges against him: two counts of threatening death, one count of forcible entry, possession of cocaine and possession of heroin.

The judge ordered MacIntyre — who is the partner of Ford's sister Kathy Ford — to have no contact with the mayor or his family.

MacIntyre has been ordered held in jail until his next court appearance on Jan. 26 2012.

The latest incident at the mayor's home began at about 8:30 on Wednesday morning when a neighbour reported a suspicious person to police.

Ford told reporters he had dealt with an "unwelcome visitor" but gave no indication that he knew the man.

But MacIntyre is well known to police and to Ford.

MacIntyre was also arrested in 2005 after Kathy Ford was shot in the face at her parents' home in Etobicoke. He faced numerous charges, but they were later withdrawn and Scott and Kathy reconciled.

MacIntyre has also spent time in jail for assault and for drug trafficking for crack cocaine, cocaine and heroin.

On Wednesday the mayor's brother, Doug Ford, called for more security around his brother. On Thursday he didn't want to talk about the incident.

"I'd rather not even comment about that. What happened, happened and we'll move forward," he said.


Hush hush, lets not talk about my brother and his drug addiction problems.