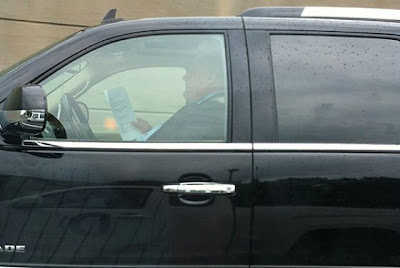 Earlier this month someone posted a photo to Twitter of Ford reading while driving his car on the highway. Not sitting in traffic on the highway, mind you, but "moving at about 70 km."

When asked whether the allegation was true, Ford replied, "Probably. I'm busy."

As mayor, Ford has refused his right to chauffeur.

One of these days he is going to accidentally kill someone - and it won't really be an accident because it will be his negligence while driving.

Ford has also been caught talking on his cellphone while driving in the past, which is a crime in Toronto.

Email ThisBlogThis!Share to TwitterShare to FacebookShare to Pinterest
Labels: Criminal