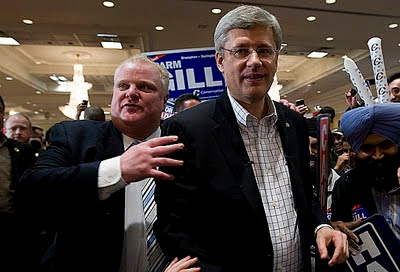 Prime Minister Stephen Harper made a surprise appearance at a barbecue hosted by Toronto Mayor Rob Ford on Tuesday evening.

At which point you might ask, who is kissing who's ass here? Heck, it might even be a 69.

Private remarks from the invitation-only event became public when some in attendance posted videos on the video-sharing website YouTube. The excerpts available suggest a warm and close relationship between the two leaders.

The mayor introduced the prime minister as the evening's special guest.

"He's my new fishing partner," Ford told the friendly crowd. "He took me up north a couple of weeks ago and I love to fish." The mayor good-naturedly bragged of killing a bigger fish than Harper did, a 39-cm smallmouth bass.

Harper paid tribute to the past political help his federal party had received from Rob Ford.

"Rob endorsed us in the election. That helped a lot," Harper said, amid warm bursts of applause from a partisan crowd that included some 700 Conservative campaign volunteers from the Toronto area.

Harper didn't stop there, putting in a campaign plug for Ontario's provincial Conservatives in this fall's election.

So yeah, lots of ass kissing in circles here.