Rob Ford locks out theatre workers at St. Lawrence Centre for the Arts

Toronto makes money off its theatre industry. It creates jobs, brings in extra tourists and they spend their money in Toronto. 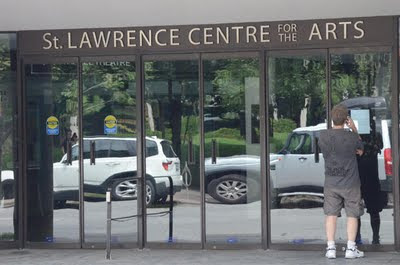 But according to Rob Ford local support for theatre is "gravy" even though Toronto makes money off of it. Specifically rental money because the city owns the St. Lawrence Centre for the Arts, a city-owned facility where stage workers were locked out a minute after midnight, Saturday.

The not-for-profit theatre and entertainment facility is home to six major arts organizations and also features independent groups that stage affordable performances for the public. Saturday afternoon, the entire building behind its large windows along Front St., just east of Yonge St. was dark and its front door was padlocked. The ticket counter, normally open from 10 a.m. to 8 p.m., was closed.

Unionized stage workers, who handle everything from lighting to set design and construction, have been without a contract since the end of 2010. After negotiations failed they were legally locked out by the city Saturday.

A letter taped to the front door, addressed to the union president, stated: “St. Lawrence Centre regrets having to take this step and is open to resuming bargaining as soon as possible. It is our sincere belief that operating efficiencies can be negotiated in order to meet the budget requirements . . .”

Only hours before the lockout, Toronto Mayor Rob Ford went on a TV talk show Friday and stated he would like to sell one or more of the three city-owned theatres, even though they are profitable for the city.

Highly-publicized KPMG reports addressed by the city this summer suggested as part of Toronto’s possible cost-cutting measures, three city-run theatres could be either sold or consolidated — the St. Lawrence Centre for the Arts, the Sony Centre and the Toronto Centre for the Arts.

Arts groups have feared Ford would demand deep cuts to arts funding as part of his commitment to lowering costs.

Shows at the popular St. Lawrence Centre may be in jeopardy. But the centre’s general manager, Jim Roe, who wrote the letter, told the Star that a deal would hopefully be reached before the next scheduled show, a private performance in early September. According to the facility’s website, the next public show, Mamaloshen, starring iconic Broadway performer Mandy Patinkin, is scheduled for Sept. 17.

“We’re going to look at ways to put it on (if staff are still locked out) — hiring staff, using management in certain roles.”

Toronto city councillor Gary Crawford, who sits on the centre’s board, said the lockout is largely due to high costs and the city’s recent commitment to finding efficiencies.

“I am a practising artist,” Crawford told the Star after the lockout. “I am a painter, a visual artist by profession and a musician. I support the arts. But as a city councillor and a board member I am very much in support of management on this decision. It’s crucial for the long-term viability.”

Crawford says the key issue is the size of the union, IATSE local 58 (International Alliance Theatrical Stage Employees), which he believes ties the facility to too many crew members. Crawford says because the St. Lawrence Centre is often rented out to independent theatre groups, many cannot afford to book it because of the excessive number of stage staff the union attaches to each booking.

“You have some shows that only need two or three stage crew, instead of the number the union hires.”

The theatre is booked for an average of 35 weeks a year even though the previous contract guaranteed unionized staff would be paid for 42 to 47 weeks of work, with up to five weeks vacation.

Another area the St. Lawrence Centre wants to revisit is a clause in the contracts that requires staff receive an extra 50 per cent increase in pay when events are videotaped.

IATSE 58 officials did not return repeated calls requesting comment. It is unclear how many workers are affected.

The St. Lawrence Centre has featured almost every type of stage show produced since it was opened in 1970.

Theatre fans in the city are now wondering if their corner of the arts is the first focus of possible Ford cuts targeting the city’s culture scene.

But while Crawford admits the incentive to cut costs at the St. Lawrence Centre is part of the overall climate at city hall, he insisted that where the theatre is concerned, cuts might actually improve service.

“If we kept costs down more theatre groups could afford the facility,” he said.

Crawford says the much needed cost-cutting dovetails with the city’s goals across the board. “We’re looking at everything. All the boards and agencies have been asked to look at their costs and how they’re running things.”

“Of course there is an element to what is happening across the city and what’s happening with the theatre,” he said. “We do not want to cut this out.”