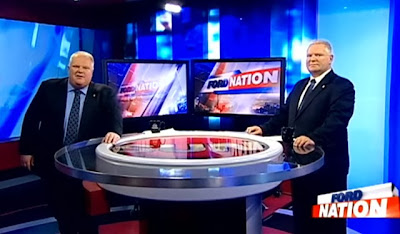 8:00: And we’re live! Except not really, because it’s taped. Sun News plays a montage sequence explaining how our hero got to this point—returning phone calls and hating the fact that garbage was in parks. What a guy!

8:03: The show suddenly shifts to the whole crack thing, with old clips of the mayor calling the media pathological liars. The people of Toronto will accept your apology any time, your worship.

8:05: Rob assures us he’s changing his behaviour, and he’s working with professionals, although he won’t say who. To date, he really hasn’t outlined how his habits will change—other than that he’s working out in the gym two hours a day. (Which I believe is also a lie.)

8:07: Rob repeats his lie that he has saved taxpayers a billion dollars. He absolutely, definitively has not. The latest article to debunk this claim is in the Toronto Star, and it’s the most thorough yet.

8:11: Rob says he’s not perfect, but the only thing he’s perfect at is saving taxpayer’s money. Really, he said that.

8:14: A self-described member of Ford Nation asks Rob how he will put these issues behind him. Rob says, “The past is the past; it is what it is.” Apparently, he is borrowing phrases from the former catcher of the New York Yankees.

8:15: Rob claims he hasn’t had a drop of alcohol in three weeks. However, he was spotted at the LCBO a couple of days ago. He also claims that he has never missed a day of council, which is likewise false.

8:24: The Fords have their first guest on the show, and it’s their Toronto Sun stenographer Joe Warmington. The Scrawler says, “It’s not an interview—we’re just chatting.” Journalism!

Ford says that he has saved more money than any mayor in Toronto’s history, that he has built subways, and that council is spending $500,000 on an environmental assessment on Bloor. Pop quiz! Which of those comments are false?

Ding ding ding! If you answered D you get a cookie.

8:27: Doug Ford, hater of constitutional rights, says there should be drug and alcohol testing across the country for governmental officials. What a libertarian.

8:29: Rob is whining about the cost of Project Brazen 2, because clearly that’s the issue here. Pro tip to the cost-conscious mayor: if you don’t have a laundry list of vices, the cops won’t spend millions investigating you.

8:33: We are promised that up next, measured and sensible journalist Ezra Levant will “hit back at the haters.” Earlier, the term “journalistic jihad” was used—because that’s obviously what asking the mayor about his alleged criminal connections and habits is.

8:38: Ezra has only been on air for one minute, and has already mentioned Jack Layton being in a massage parlor that he refers to as a “whorehouse.” His diatribe is one long false equivalency that tries to cast Ford as a victim because he’s a conservative.

8:39: Ezra claims Rob gets criticized because he is fat, doesn’t drive a Prius, and is not a hipster. Is Ezra a real person, or is he some kind of algorithm that scrapes the worst internet comments?

8:44: Ezra repeats the false claim that Toronto Star reporter Daniel Dale took pictures of Rob Ford’s backyard, and Rob seems to say it was in his backyard. This is patently false.

8:46: Ezra compares Rob to Princess Diana, presumably because Rob is the people’s princess. Levant goes on to say that Ford, who bowled over diminutive councillor Pam McConnell today, is being bullied.

8:47: Rob claims he was fired from his beloved high school football coaching gig because of “political reasons.” If by “political” he means that “My brother and I kept on saying how these kids would be in the gutter if it wasn’t because I’m such a saviour, and they can’t help themselves,” then that’s accurate.

8:53: Sun News plays the Jon Stewart clip of Rob Ford saying how much he likes to eat cats. He and Doug snicker along as they watch in the split screen.

8:55: Rob and Doug says that the people should decide in an election on October 27. Of course, today Doug Ford put forward a motion to call on the province to have a snap election. So, let’s just have an election whenever is convenient for the Fords.

Funny how Rob Ford and his brother Doug managed to make a whole TV show about themselves and skip the fact that they are wife-beating, drug-using, drunk drivers that belong in prison and certainly don't belong in city hall.