Thanks to health problems Rob Ford has decided not to run for re-election as mayor of Toronto.

Instead his brother Doug Ford has decided to step up to the plate - opening the door to a Ford Brother is vaguely more competent.

New polls show that Doug Ford is in 2nd place - but polling these days are notorious inaccurate because they only poll people who are at home, and who own home phones (landlines). It does not poll people who own only a cell phone - or people who have call display and refuse to answer the phone when an unknown number calls them.

The most recent poll by Forum Research Inc. shows the following:

Just days ago a similar poll pegged Rob Ford at 28%. Switching to the drug dealer brother instead of the drug addict apparently boosted Ford Nation's chances of winning by 6%.

So unless something disastrous happens (like the polls were incredibly inaccurate as to be nowhere near the result) John Tory will likely be the next mayor of Toronto.

It would be nicer if it was closer to 40% Tory, 40% Chow, and 20% Ford... then at least election night would be less likely to be a landslide victory for Tory.

John Tory as you may have heard is basically just "Rob Ford Lite" - all the Conservatism, but with none of the crack-smoking or boozing.

Which means for the right-wingers, this election is basically fixed and rubber stamped. Most people are voting for either "Rob Ford's Brother" or "Rob Ford Lite".

If only there was a third option people could vote for. 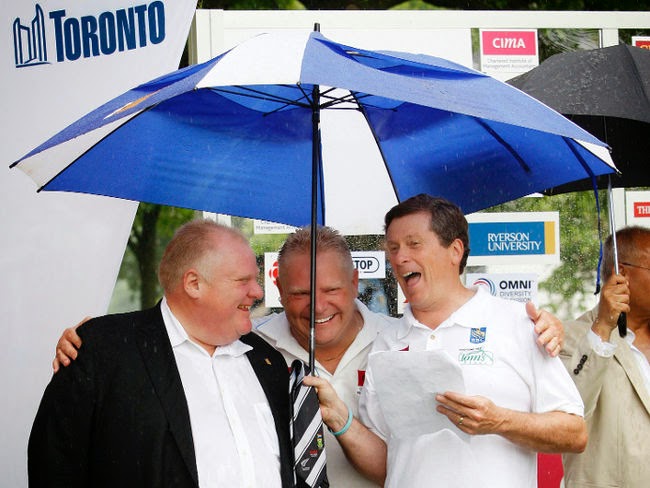