Rob Ford has tumour in his bladder and in excruciating pain 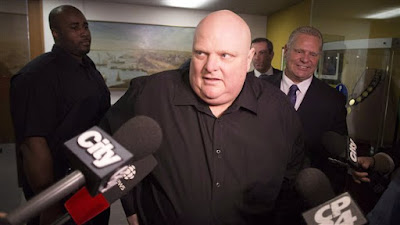 Former Toronto mayor Rob Ford is in "excruciating pain" and a new tumour has been found on his bladder, brother Doug Ford says.

Ford's medical team at Mount Sinai Hospital discovered the tumour after Ford, 46, was hospitalized for several days last week with abdominal pain, a statement released by his office on Wednesday said. The Etobicoke councillor is at home now, but is expected to return to hospital tomorrow.


"I've never seen him in this much pain," said an emotional Doug Ford.

Doctors have yet to determine if Ford's tumour is new, or if it's potentially related to the abdominal liposarcoma he was diagnosed with last year.

"At this time, we are still awaiting testing results to determine if it is related to the previous growths, as well as whether it is malignant," the statement from Ford's office said.

Ford will get additional treatments to deal with the tumour, though the statement didn't specify what type.

"Councillor Ford and his family wish to extend their continued gratitude for the thoughts, prayers, and support that they have received during this difficult time," the statement said.

Doug Ford said the new tumour came out of left field and was a major blow to his brother's morale.
"It's tough right now," he said.

Years of over-eating, drinking lots of hard liquor, drunken stupors, and smoking crack cocaine can leave a person riddled with cancer in multiple locations. Hopefully Torontonians learn from this lesson, don't ruin your body like Rob Ford did.

Rob Ford actually has TWO tumours in his bladder, both are believed to be cancerous.