The same day, an unknown member of Rob Ford's staff was interviewed by the Toronto Police homicide squad about the Rob Ford Smoking Crack Video and a possible homicide.

Two separate sources have confirmed to the media that the interview took place.

The staffer felt compelled to share the tip with police, which came to him from someone else in the mayor’s office, with police because it could constitute evidence in a homicide investigation.

The staffer did not verify the credibility of the information.

Two homicide officers interviewed the staffer away from City Hall, according to a source with knowledge of the meeting.

Staff Inspector Greg McLane, head of Toronto Police's homicide squad, confirmed to the media that an interview had taken place, but said there isn't enough to lead to a homicide investigation. McLean said that homicide officers conducted the interview only because they have expertise that other officers don't.

The people who were attempting to sell the Rob Ford Smoking Crack Video have gone missing in the last week and many media pundits are beginning to speculate they may have been murdered.

The informant in the mayor’s office claims to know the address and unit number where one of the people who made the video was living.

The informant went on to say that the video originally belonged to an individual who may have been killed for its potentially valuable contents, according to sources.

Gawker has raised the $200,000 to buy the Rob Ford Smoking Crack Video, but nobody has stepped forward to claim the money so far. Possibly because they've been murdered and their bodies have been dumped.


The only image released from the video shows Rob Ford standing with a man believed to be Anthony Smith, a 21-year-old man gunned down in downtown Toronto on March 28th.

Muhammad Khattak, a 19-year-old living in north Etobicoke, was hit in the arm and back the same night Smith was killed two months ago outside a King Street nightclub. There is no indication he was involved in the shooting or the making of the video, but according to Muhammad Khattak's mother he and Anthony Smith were good friends.

There is no word on whether Muhammad Khattak has recently gone missing.

Two sources, one with the Toronto police and another involved in politics, say homicide detectives are now investigating whether that the video phone originally belonged to 21-year-old Smith and if the video was made the night of the shooting.

Toronto Star and Gawker reporters were first contacted about the video of Rob Ford Smoking Crack on April 1st - only 4 days after the death of Anthony Smith. 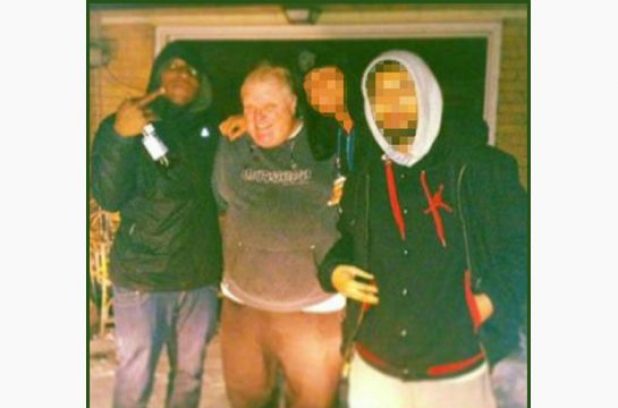