The city's compliance audit committee will meet on Wednesday to consider allegations that four right-leaning councillors broke elections law. The stakes are high, and so are tensions. 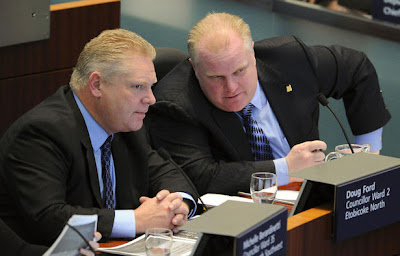 The committee ordered an audit of Mayor Rob Ford's campaign financial statements in May after assessing a complaint by library board vice-chair and left-leaning activist Adam Chaleff-Freudenthaler. A new group fronted by Chaleff-Freudenthaler, Fair Elections Toronto, filed additional complaints in June about the financial statements of conservatives Doug Ford, Giorgio Mammoliti, James Pasternak and Michael Thompson.

Compliance audits are expensive and stressful for politicians. Their legal fees frequently run into the tens of thousands of dollars, and they face potential sanctions ranging from fines to, less likely, removal from office. In an attempt to prevent an audit, Rob Ford has appealed the committee's decision in court.

Mammoliti alleged in June that the “frivolous” complaints against him and the other councillors were the product of a conspiracy against the mayor and his allies. He said he was considering a lawsuit. Now Chaleff-Freudenthaler, the apparent target of Mammoliti's ire, has alleged in a complaint to the city's integrity commissioner that Doug Ford attempted to “bully and intimidate” him at City Hall during a council meeting Wednesday afternoon.

Chaleff-Freudenthaler wrote: “Following those words, I asked Councillor Ford if he was threatening me. He then nervously turned around and walked away.”

The committee will consider another series of complaints on Monday. Among them are complaints against left-leaning Councillor Maria Augimeri and the Ford-backed challenger with whom she is embroiled in a separate court battle, Gus Cusimano.