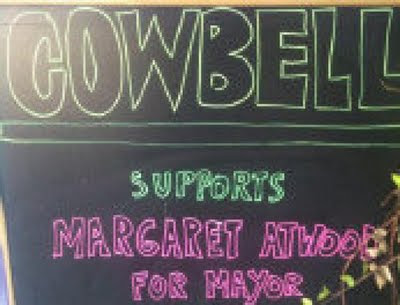 A tiny note on a coffee house tip jar has a big message for Doug Ford.

It's the same message that's written on sidewalk chalkboards on Queen St. W. and social networks dedicated to the cause.

“Margaret Atwood for mayor of Toronto.”

No, we're not in the midst of an election. And the award-winning author has expressed no interest in running for office. The cheeky campaign, which seems to have no central force, is about protecting city libraries and poking fun at the city councillor who said he would not recognize a literary icon.

Perhaps the greatest purpose of the campaign is to make sure the public has a say in how their taxpayer dollars are spent. 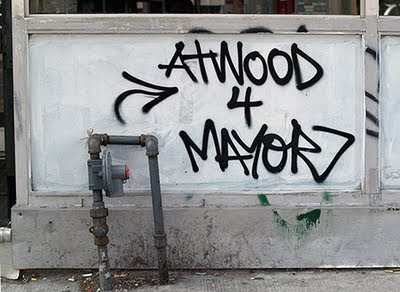 Atwood rallied Torontonians to fight for their libraries, after city-hired consultants KPMG suggested closing branches to save money. The avid Tweeter promoted a petition to save the city's libraries to her 225,200 followers on the social networking site, which crashed the server hosting it.

“She's not dealing with the problem. Tell her to go run in the next election and get democratically elected. And we'd be more than happy to sit down and listen to Margaret Atwood,” Doug Ford said last Tuesday.
He also said he didn't know the novelist. 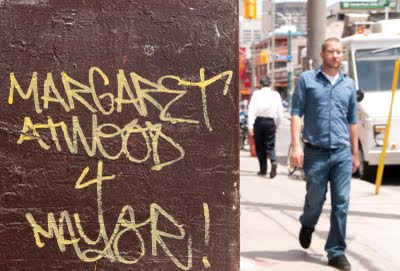 A note went up on the tip jar at Red Rocket Coffee on Wellesley St. the next day, said barista Michael Scott.
“It's a strange statement to make. I don't think I would have finished high school without knowing Margaret Atwood,” Scott said. “Not even to say that, but to proclaim it with pride, as if it would damage her reputation somehow.”

More than 5,000 people have “liked” a Facebook page encouraging Atwood to run for mayor.

“So, apparently, you need to be elected to be heard,” Julia Vyse posted on the page.

“This would be brilliant! And a good way to solve a lot of our problems as a city,” wrote Heather Danter.

The Twitterverse is also encouraging the author to run for mayor. Users are Tweeting signs endorsing her future as a politician, including sidewalk chalkboards at a French bistro in Parkdale and a café on Queen St. W. 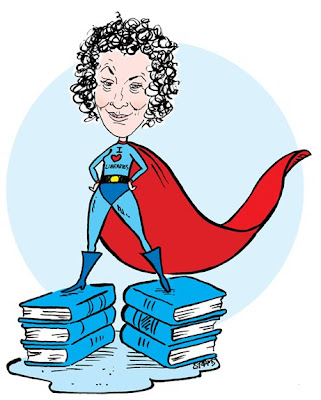 The “Atwood for Mayor” movement includes a greater discussion about the value of libraries, and that's evident on the author's Twitter feed.

“The local public library was the only place in the area that had AC in the summer. Fondly remember reading 3 books a visit,” Lily Callahan wrote to Atwood.

Chapters Indigo is supporting the author, too. The chain is offering 30 per cent off her books across the country for any public library card holder.

“It was a tongue-in-cheek way to contribute to the dialogue and in the process it also allowed us to express our support for Canada's municipal libraries and one of Canada's most iconic writers,” said Janet Eger, the chain's vice-president of public relations.