Rob Ford given death threat via 311

Mayor Rob Ford says he isn’t worried about a man charged with making death threats against him. 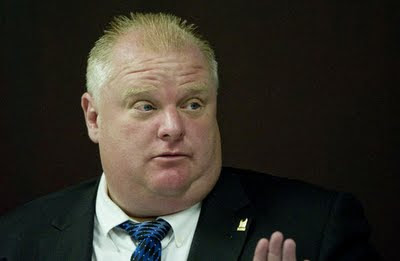 Anthony Vella, 56, called 311 on July 14 and made threats against Mayor Rob Ford. Officers at 52 Division, which covers City Hall, launched an investigation.

Mayor Rob Ford told a news conference Thursday morning he had been the victim of a death threat. “I don’t take it that seriously,” says Rob Ford.

Anthony Vella has been charged with threatening death. He has no prior record, according to court staff.

Vella was released on $500 bail. The terms of his release included conditions that he not come within 200 metres of City Hall (except to attend court dates nearby), and that he “abstain from communicating directly or indirectly with Mayor Robert Ford.”

His next court appearance is August 18th.

DISCLAIMER: This blog does not condone any sort of violence or threats of violence. We're pacifists.

Email ThisBlogThis!Share to TwitterShare to FacebookShare to Pinterest
Labels: Criminal