"Rob Ford, you fat fuck, this is all your fault"


From a garret soundproofed to all but the call of the cantor, Mondoville emitted yet another asocial Twit: “[N]ot one person online today was sticking up for Stephen Marche, writer unpublished by [the Globe and Mail].”

Well, give me enough time to formulate a response, for fuck sakes. (I can’t do everything same-day.) I will stick up for Marche, despite the fact he’s quite well-connected enough not to need it. I’ll stand up for him on principle, which I shouldn’t be doing, because he wasn’t being honest.


“Rob Ford’s not popular despite being fat”

Marche’s column in the 2010.10.16 Globe described how, far from resenting Toronto mayoral candidate Rob Ford for being fat, we identify with him: 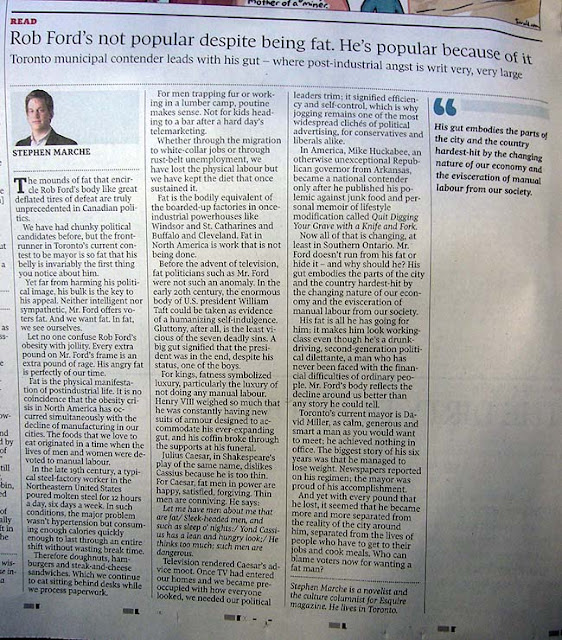 Marche should have known this was dangerous territory – then carried right on anyway. It was only a couple of years ago that former Globe city columnist John Barber called Rob Ford a fat fuck in one of Ford’s many ashtray-heaving shitfits right there in hallowed Council Chambers. An augury of the future, as it turned out: Ford is a fat fuck only because he’s so repugnant in so many other ways at the same time.

Marche missed a chance to write an honest piece about the constellation of indicators Ford presents to urban Torontonians, who recoil in disgust. Instead, he chose to wax analytical and bullshit us.


Let me take this from the top

I don’t really “do” politics, so you should view the following as a statement of principle that merely happens to coincide with an election campaign. It is fundamentally about urbanism and the wrong kind of people, a distinction I am happy to make even if you’re afraid to.

It is insulting and damaging to dismiss or demean people just because they’re fat, even if they ate themselves to that state. We don’t lecture lung-cancer patients that they had all that time to quit smoking. If you get yourself into an accident and lose an arm, we don’t harangue you for the rest of your life about how stupid you were and, by extension, are. We could do so; civilizing forces prevent us. If you’re fat, maybe that’s a subject for discussion with your doctor or at Lazy Bear, but that’s about it. We can still campaign against obesity and smoking and for accident prevention, but blaming individuals just is not done.

It is journalistically possible to discuss a celebrity’s weight. You don’t even have to pussyfoot around the subject. Jan Wong didn’t when she took Rita MacNeil to lunch (Globe, 1998.12.29):


But when my platter of lox and bagels arrives, she agrees to share it – onions, cream cheese, capers and all. At 54, MacNeil is 5′2″ and probably weighs close to 300 pounds. “I don’t tell my weight,” she says, but allows that her dress size is “in the 20s.” As Canada’s biggest country crooner, MacNeil has endured tasteless jokes about her size, even as she’s tried – unsuccessfully – to launch a line of plus-sized women’s clothing.

She swims 45 minutes a day. But her weight, she says, has “gone up and down like a yo-yo.” After trying “everything under the sun,” she’s given up. “The way I look at it, if you’re big, you’re big,” says MacNeil, in an ankle-length black velvet dress with a flowing green and black leaf-patterned coat. “You got to live your life. You can’t wait until you’re a size that image-conscious people will approve of.”

That’s the same no-nonsense attitude MacNeil takes in her new book, On a Personal Note. Well-meaning people sometimes ask, she writes, “Rita, did you ever think you’d get this big?” She also details the insults, including her nickname, Eat a Big Meal.

But we aren’t talking about that kind of article.

Rob Ford isn’t repugnant and offensive because he’s fat. Being fat is only one part of a full package of traits that trigger disgust and apprehension in anyone who doesn’t pick fights with the press, doesn’t assault his wife (charges dropped), doesn’t lie about getting shitfaced and telling off civilians at a football game, doesn’t call AIDS your own fucking fault, doesn’t praise Orientals for working like dogs, doesn’t drive impaired in his natural home, Florida, and isn’t a boorish, backward daddy’s boy. And he’s fat.

Citizens of this city who want this city to become a real city full of real citizens recoil at the discovery of so many troglodyte characteristics packed into a single sweaty package. The implications are even more disturbing: There are more people just like him, and they live in the same city. But why? Are they even aware they live in a city? Like the Toronto Sun, is their mentality still that of a small town in the hinterlands circa 1979? How is that possible?


Why are we sharing a city with these people?

They’re obviously temperamentally and intellectually unsuited to city life. Their idea of a good time is a barbecue. Do we really live in the same city as them? Before amalgamation, we could pretend we actually didn’t. Why do we have to now, or tomorrow, or ever again?

These are not people who move to a city to better themselves. They have no idea of self-betterment, only selfishness and greed. They want more roads, more cars, more money spent on roads and cars and precisely fuck-all for everything else. Most emblematically, they demand the unfettered right to chop down any tree on their own property. (They all own “property.”)

These people make the committed urbanite sick. They’re appalling. “Vulgar” doesn’t begin to describe what’s wrong with them. Their entire way of life is completely wrong; the difference is they think the same about you and want the right to defund everything that makes your way of life possible.

That right there is the difference between a liberal and a conservative. A liberal is so out of touch with his own beliefs and feelings he can’t even write them down when you pay him to. A liberal will write a column in a national newspaper not actually saying what he means, attempting to empathize with a buffoon his social class finds disgusting. (He won’t mention the disgust.) A conservative will tell you to your face you’re wrong and he’ll mean it. Why shouldn’t he? He knows he’s right.


The wrong kind of people

An honest columnist would spend the entire election campaign writing what he actually thinks: The fat fuck Rob Ford represents all the wrong kind of people. (Their very existence in the same city is alarming.) It boggles the mind to imagine a lying, abusive buffoon like Rob Ford actually holding mayoral office, an honest columnist would admit. And it shouldn’t take a doctor to wonder if Rob Ford is medically fit for the job. (It was John Barber who mused – in the Globe, 2006.05.17 – that David Miller could die in office. Care to lay odds?)

The existence of Rob Ford as a credible candidate for mayor further demonstrates that Spacers™ and the soi-disant progressives of the urban downtown have not budged the meter one notch. You don’t need to be Evgeny Morosov to observe that the Twittering classes, obsessed with their shared streets and bike lanes and centres for social innovation and urban de-fencing and subway macaroons and sonic histories of the city, have quite wasted their time. Importantly, they never missed an opportunity to refrain from openly declaring there is a war on the car and the car’s got to lose. They might as well have been sporting green Twibbons or nattering on about Moldova.

Stephen Marche was not, in this context, an honest columnist. Nonetheless, I support his right to write what he did – a mild, off-topic, allusive and disingenuous rebuke. Hardly a firing offence.

If I may paraphrase Sinéad O’Connor, fight the real enemy.